Sermorelin is a GHRH (releasing hormone) peptide analogue. Its peptide sequence is comprised of 29 amino acids. This sequence is a portion of the endogenous human GHRH, and is currently considered to be the shortest synthetic peptide that possesses the full array of functional GHRH activity. Due to this fact, sermorelin is considered.

Sermorelin, in comparison, is not governed by the same strict laws of medical use and this is largely due to its safety profile. For this reason, sermorelin is much more accessible and is commonly prescribed by doctors in anti-aging and wellness clinics in conjunction with other growth hormone releasing peptides such as GHRP-2 and GHRP-6.

Even though in bodybuilding circles we don’t hear much about Sermorelin, this doesn’t mean that this peptide does not have its uses. In fact, anti-aging and hormone replacement clinics have been prescribing it for years because it works as a clean GHRH. The problem for the bodybuilder or athlete is that it has a very short half-life of about ten (10) minutes. This becomes an unattractive feature when compared to the half-life of MOD GRF (1-29) (CJC 1295 without DAC), which comes in around 30 minutes. Despite its short window, it does bind quite effectively to the pituitary receptors.

The other main down side associated with its very short half life is that it is quickly broken down by blood enzymes within minutes. This is why a GHRH peptide with a half life of 30 minutes or longer is desirable, since it will survive the blood enzyme death and allow it to circulate the body looking for hormone receptors to bind to.

Sermorelin has a wide range of positive effects. Due to its nature as a GHRH, sermorelin only increases the body's ability to produce more growth ; it is not an injection of hormone itself. In both a performance enhancing and general well-being sense, sermorelin has a wide array of benefits that make it a powerful and valuable substance.

GH also promotes efficient energy metabolism. Studies have also shown that GHRH directly promotes slow wave NREM (non-rapid eye movement) sleep, and thus GHRH insufficiency causes a reduction in the amount and intensity of slow wave NREM sleep which results in either insomnia or dysomnia(sleep disorders that causes sleep to lose its restorative capacity). inhibits GH secretion from the adenohypophysis. Both GHRH and somatostatin are produced in the same neuron but they are released in alternation to each other thereby resulting in the pulsatile release of GH from the neuron.

Sermorelin therapy increased the volume of hormone secreted by the stimulated pituitary gland, which is later converted by the liver into IGF-1. The increased amount of IGF-1 in the blood stream leads to many benefits from the use of Sermorelin: increasing metabolism and growth of new cells within the body's organs and bone.

Sermorelin, along with the other peptides you will use, comes as a delicate lyophilized powder that should be kept out of the light and in a cool dry place. Reconstitution is done with bacteriostatic water (BC water) or sodium chloride meant for injection. Injections can be administered one hour before workout at a dose of 200mcg-300mcg. Normally, Sermorelin injections are taken before bed at around 300mcgs.

The best time to take Sermorelin is prior to bedtime. Hormone is primarily released during sleep and most beneficial to the body's recovery and repair during this time. Sermorelin has a promoting effect on sleep and can therefore make you tired if taken during the day.

Sermorelin, along with the other peptides you will use, comes as a delicate lyophilized powder that should be kept out of the light and in a cool dry place. Reconstitution is done with bacteriostatic water (BC water) or sodium chloride meant for injection. Injections can be administered one hour before workout at a dose of 200mcg-300mcg.

Normally, Sermorelin injections are taken before bed at around 300mcgs. Of course, as with any GHRH, you will want to use this peptide alongside a GHRP like GHRP-2 or Ipamorelin for maximum release of growth hormone stores. Ideally, though user could still benefit from using a GHRH like CJC 1295 with DAC and a GHRP like Ipamorelin throughout the day and then utilize Sermorelin as a pre-bed timed dose. Do not discount Sermorelin as simply an anti-aging peptide. It can still help promote the growth of lean body mass and increase the availability of IGF-1 in the blood stream.

Users must be warned of drug dependence and over dosage should they disobey instructions for proper and safe use of sermorelin. The recommended dosage is 0.2-0.3 mcg once a day. Follow administration instructions carefully for the best results from sermorelin and HGH therapy in general.

Side effects of sermorelin are extremely uncommon as proven by clinical studies. However, miniscule chances still lie in adverse reactions such as headache, dizziness, hyperactivity, nausea, and tightness in the chest. 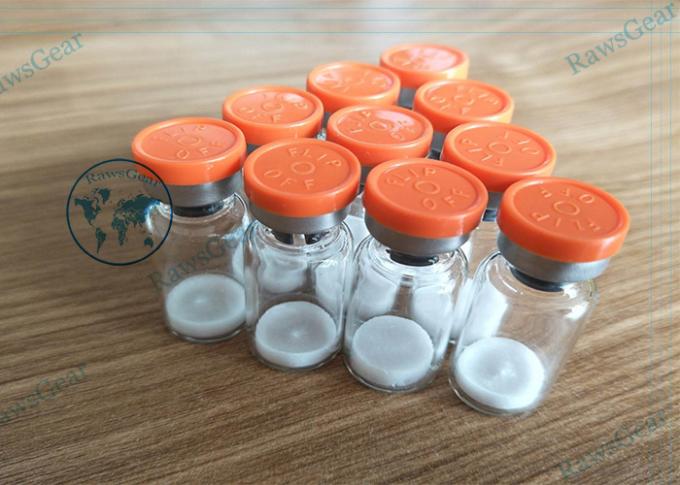